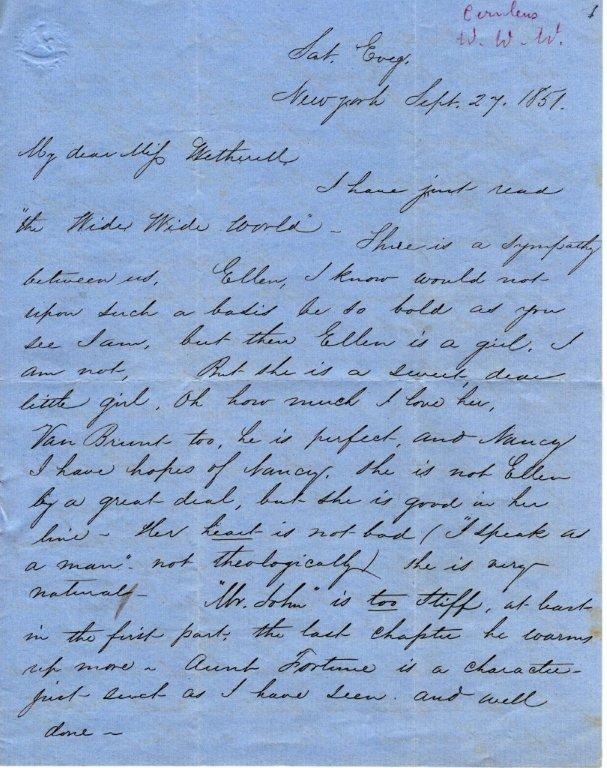 In this lengthy two-part letter "Ellen's Ardent Admirer" gives his opinion on most of the principle characters. In his second letter he remarks on the American character Warner displays naturally through her characters.

Reviewer appreciates The Wide, Wide World, especially as a book for children; mistakenly exposes the novel's Scottish authorship ("appears as an American book, but it is utterly deficient in American spirit")

Reviewer acknowledges the book's good intentions; points negatively to its overt didacticism; makes fun of the author's overreliance on tears

Reviewer of Warner's Queechy discusses the fame of its author and the literary success of The Wide, Wide World

Reviewer compliments The Wide, Wide World for standing out among the "now common class of religious novels"; offers an excerpt illustrating the novel's "agreeable style"; concludes with a complaint about the author's "diffuseness" (novel mistakenly attributed to "Emily" Wetherell)

Reviewer praises The Wide, Wide World for its verisimilitude and its heroine's religious journey; appreciates the novel's ending

Reviewer investigates the current state of the novel as compared with its eighteenth-century forebears; considers contemporary tendencies toward moral argumentation; expresses mixed feelings about the genre's evolution; discusses The Wide, Wide World, Queechy, and Dollars and Cents as positive examples of a new class of American novel, "having a character of their own--humane, religious, piquant, natural, national"

Reviewer discusses the growth of literature for "juveniles" and its generic potential; praises Warner's contributions to the field