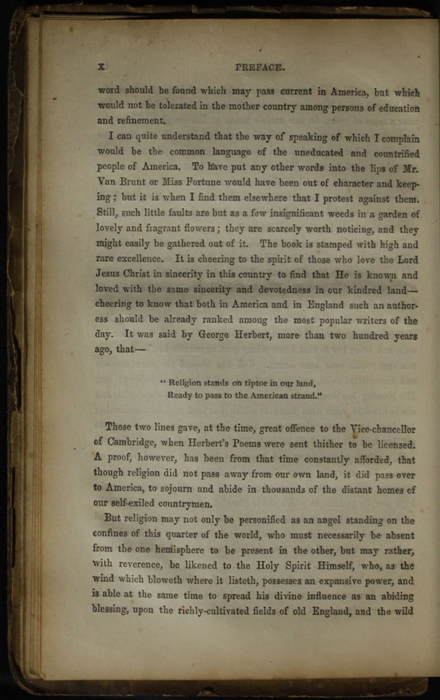 x
PREFACE.
word should be found which may pass current in America, but which would not be tolerated in the mother country among persons of education and refinement.

I can quite understand that the way of speaking of which I complain would be the common language of the uneducated and countrified people of America. To have put any other words into the lips of Mr. Van Brunt or Miss Fortune would have been out of character and keeping ; but it is when I find them elsewhere that I protest against them. Still, such little faults are but as a few insignificant weeds in a garden of lovely and fragrant flowers; they are scarcely worth noticing, and they might easily bo gathered out of it The book io stamped with high and rare excellence. It is cheering to the spirit of those who love the Lord Jesus Christ in sincerity in this country to find that He it known and loved with the same sincerity and devotedness in our kindred land— cheering to know that both in America and in England such an authoress should bo already ranked among the most popular writers of the day. It was said by George Herbert, more than two hundred years ago, that—
" Religion stands on tiptoe in our land. Ready to pass to the American strand.”
Those two lines gave, nt the time, great offence to the Vice chancellor of Cambridge, when Herbert's Poems were sent thither to be licensed. A proof, however, has been from that time constantly afforded, that though religion did not pass away from our own land, it did pass over to America, to sojourn and abide in thousands of the distant homes of our self-exiled countrymen.

But religion may not only bo personified as an angel standing on the confines of this quarter of the world, who must necessarily bo absent from the one hemisphere to be present in the other, but may rather, with reverence, bo likened to the Holy Spirit Himself, who, as the wind which blowoth where it listeth, possesses an expansive power, and is able at the same time to spread his divine influence as an abiding blessing, upon the richly-cultivated fields of old England, and the wild

This is page x of the preface to the he [1853] Clarke, Beeton, & Co. reprint, version 1. The page is full of text except for the header which says "PREFACE" and an excerpt from George Herbert in the middle of the page, "Religion stand on tiptoe in our land, Ready to pass to the American strand."