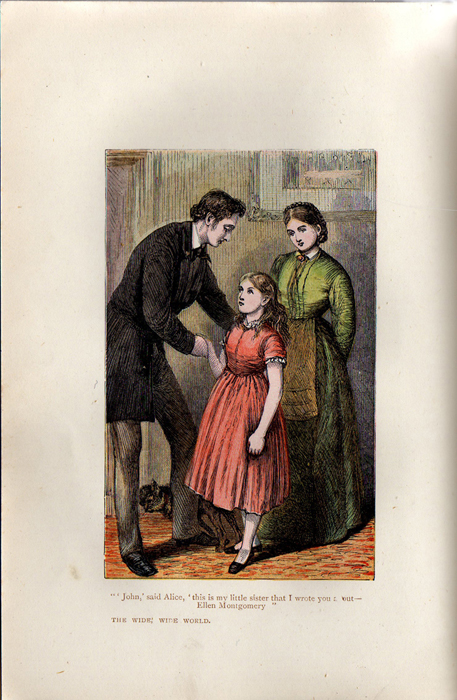 This illustration, appearing on page 272b of the [1899] George Routledge and Sons Edition, depicts Alice introducing Ellen to her brother John for the first time. A painting hangs behind the trio and Captain Perry, Alice's cat, wraps himself around John's leg as John leans over Ellen to shake her hand. A caption below the illustration quotes a sentence from page 273 of the text. Alice and Ellen, dressed in brightly colored dresses, provide a contrast to John, who is dressed in all black. John's posture as he leans down to kiss Ellen, gives him a position of dominance as Ellen looks up at him and allows him to take her hand. Alice, positioned demurely behind Ellen, looks down at Ellen, so that both Alice and John, who have recently immigrated from England to America, look down on her. The positions of the trio suggest a superiority of the English and an inferiority of Ellen, who represents American nationality. At the same time, the intimate act that is about to take place in this scene, seems to suggest an important intimacy between America and its colonizer.