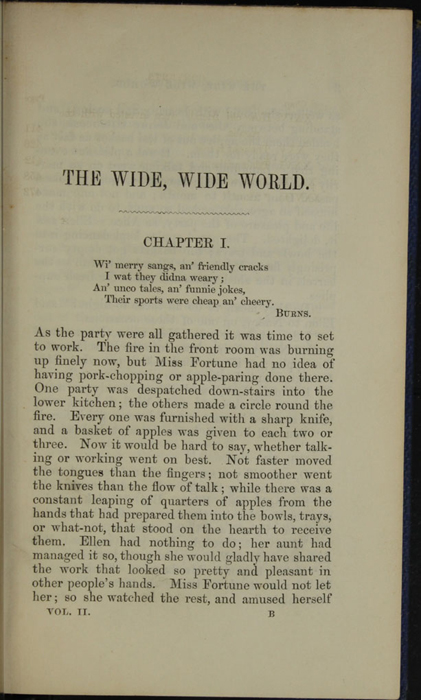 THE WIDE, WIDE WORLD.
CHAPTER I.

Wi’ merry sangs, an' friendly cracks
I wat they didna weary ;
An’ unco tales, an’ funnie jokes,
Their sports were cheap an’ cheery.
Burns.

As the party were all gathered it was time to set to work. The fire in the front room was burning up finely now, but Miss Fortune had no idea of having pork-chopping or apple-paring done there. One party was despatched down-stairs into the lower kitchen; the others made a circle round the fire. Every one was furnished with a sharp knife, and a basket of apples was given to each two or three. Now it would be hard to say, whether talking or working went on best. Not faster moved the tongues than the fingers; not smoother went the knives than the flow of talk; while there was a constant leaping of quarters of apples from the hands that had prepared them into the bowls, trays, or what-not, that stood on the hearth to receive them. Ellen had nothing to do; her aunt had managed it so, though she would gladly have shared the work that looked so pretty and pleasant in other people’s hands. Miss Fortune would not let her; so she watched the rest, and amused herself

This is the first page of text of volume 2 of the 1852 Sampson Low Reprint.  The Wide, Wide World is written at the top quarter of the page in bold, with a decorative rule under it. An excerpt from Robert Burns' poem, "Halloween," is featured under the decorative rule.  The text begins halfway down the page.