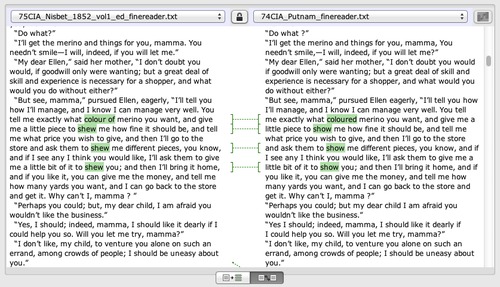 In this Juxta sample, users are specifically looking for examples of British versus American spelling changes between the first edition and the James Nisbet, Sampson Low, Hamilton Adams 1852 edition.

Textual variation is an essential component of The Wide, Wide World Digital Edition. Rather than simply re-copying previous editions, transatlantic publishers often took care to edit Warner's novel to meet the needs of their intended audiences.

Omeka already includes a plug-in for easily displaying texts encoded in TEI, and this is what we use to make the full text of the editions available to our users. We are editing each of the novel's fifty-three sets of plates, noting issues of formatting and place and person names.

In order to identify and annotate the corpus's variants, we have requested NEH support to work with NINES and the Scholars' Lab at the University of Virginia to develop a version of their Juxta software that will be user-centered and integrated into Omeka as a software plug-in. It would be nearly impossible for users to find variants in the fifty-three different edition galleries. Plus,  encoding all of these variants on one base text would also have been too time-consuming and not economically feasible for the project. Juxta allows users to choose their own comparative models and also gives us the capability to annotate comparisons for them via the plug-in's interactive framework.

Juxta includes a heat map indicating the intensity of revisions to particular sections of text and allows users to choose any two editions for a side-by-side examination. Each edition will have an introduction describing its variants across the full corpus as well as annotations that are accessible to the user as they study a particular variant. These annotations will place each variant into conversation with the full textual corpus and explain how the variant compares to changes made by other reprinters. The annotations will also situate these changes in historical context. 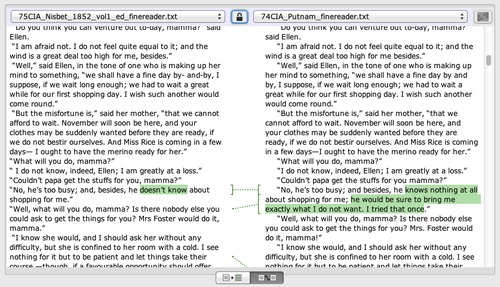 In this variant an entire sentence was removed from the Putnam edition.