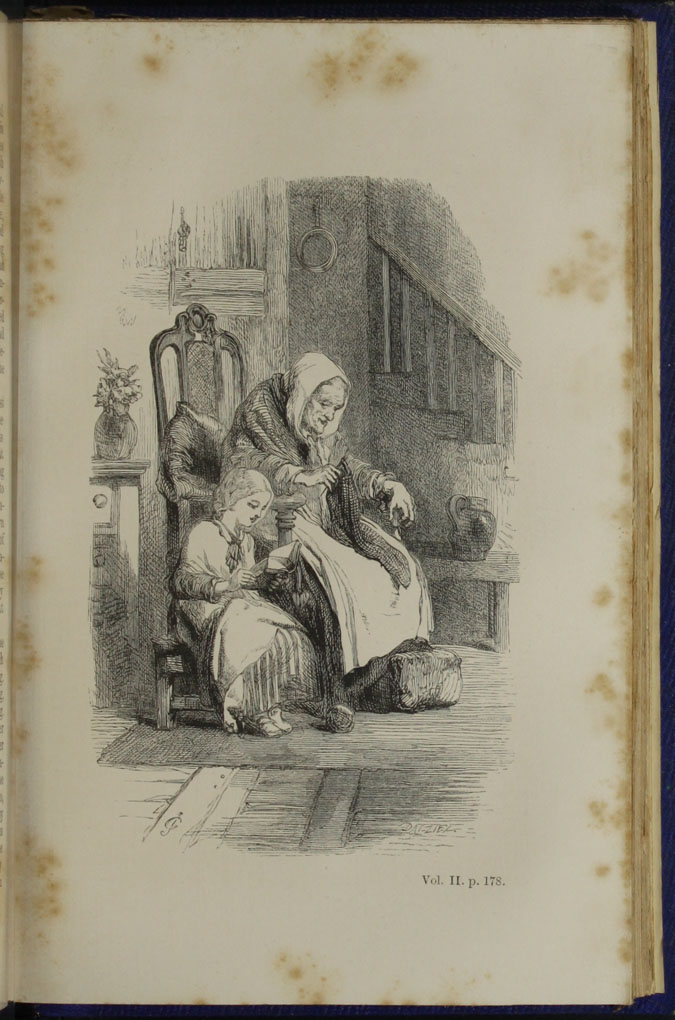 An illustration from volume two of the 1853 James Nisbet, Hamilton, Adams & co. "New Edition" Reprint, on page 178b. This image depicts Ellen, sitting on a stool at the feet of Mrs. Blockson, reading to her behin the stairs. The picture is light, with shading around the back staircase. Mrs. Blockson is crouch in her little chair, listening to Ellen read.

Illustration on Page 212a of the [1899] George Routledge & Sons, Ltd. Reprint Depicting Mr. Van Brunt Visiting Ellen at her Sickbed 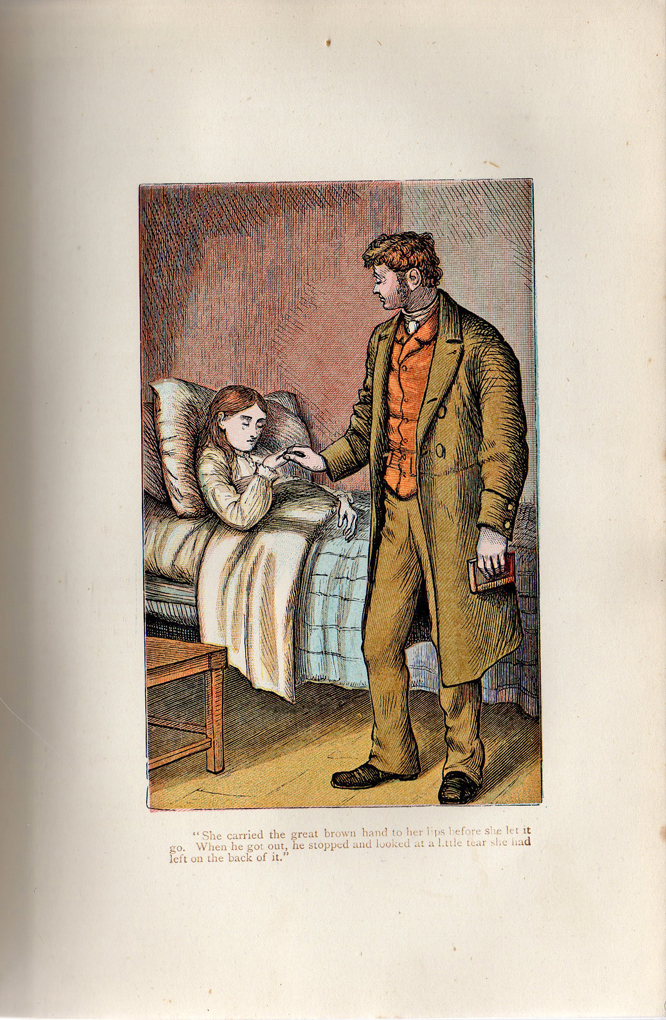 This illustration, appearing on page 212a of the [1899] George Routledge and Sons edition, depicts a pale Ellen, sick in bed, as she kisses Mr. Van Brunt's hand. Mr. Van Brunt, dressed in a long green coat and pants with a buttoned orange shirt, stands next to Ellen's bed holding a hymn book in one hand as Ellen kisses the other. A caption below the illustration quotes a short passage from page 212. The illustration embodies the ideas of sentimentalism, which utilizes emotion to affect ideas of morality. Ellen, who has just expressed her desire for Mr. Van Brunt to become one of the "fold of Christ's people," appeals to Mr. Van Brunt (and the viewer of the illustration) through a display of emotional affection. The presence of the hymn book foreshadows Mr. Van Brunt's eventual devotion to Christianity. 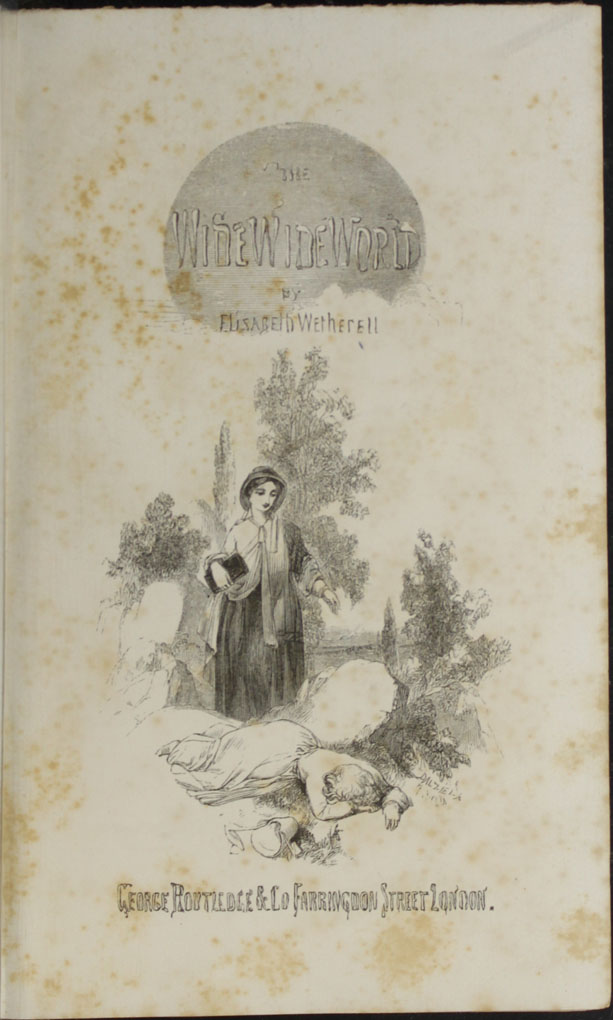 This black and white illustration, appearing as the title page vignette to the 1853 G. Routledge & Co. reprint, depicts Alice finding Ellen distraught on the Cat's Back. Both Alice and Ellen are framed by the trees and rocks of the scene. A moon overlooks the scene, with the title, lacking a comma, floating above it like clouds. It uses Susan Warner's pseudonym, Elizabeth Wetherell. The name of the publisher appears below the scene in a similar typography. The name of the illustrator, Dalziel, is inscribed in the lower-right corner of the illustration.

Subjects: The Cat’s Back, Ellen, Alice 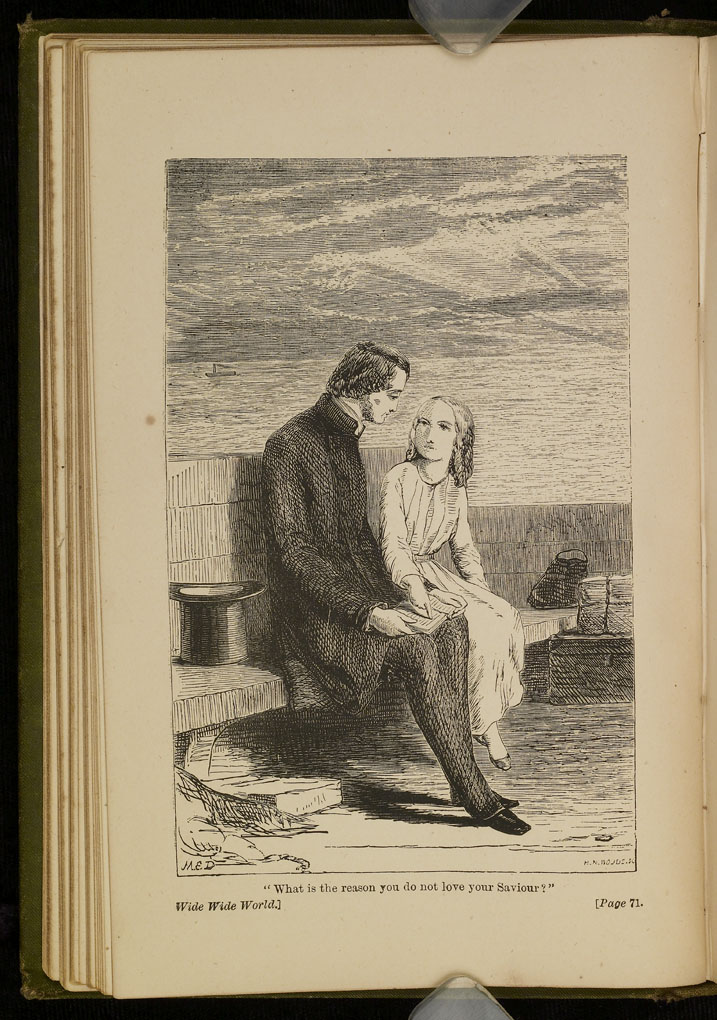 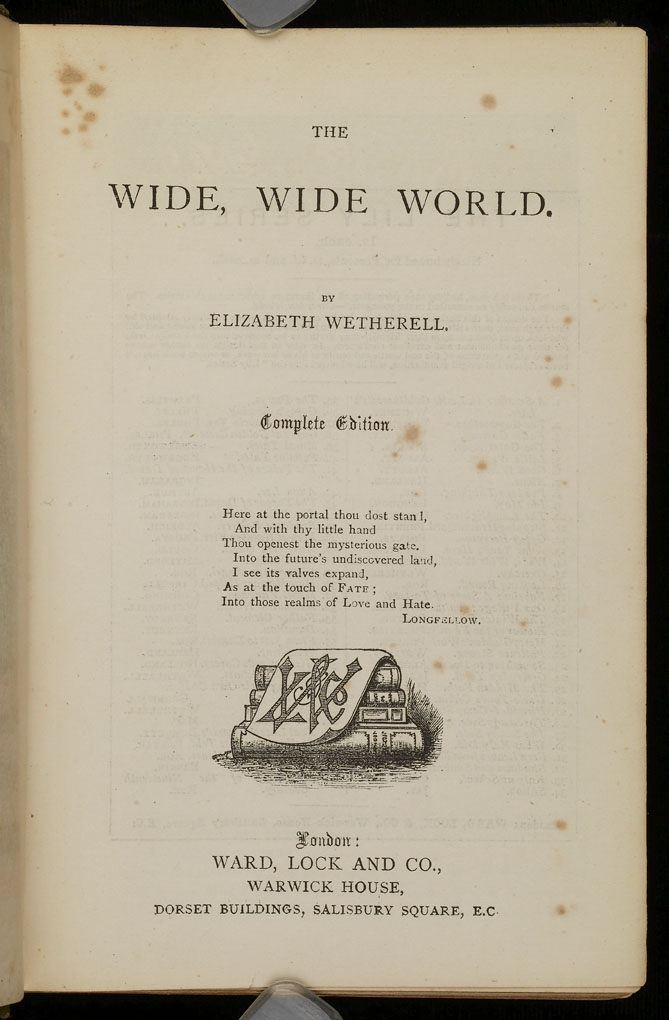 In the title page for Ward, Lock and CO.'s 1885 edition of the novel, the title is printed in the top quarter of the page followed by a period. The author's pseudonym Elizabeth Wetherell is printed in the page's middle. Below the pseudonym is a line attesting to the printing as a complete edition. An inscription taken from Henry Wadsworth Longfellow's poem, "To a Child," appears in the page's center. In addition to the inscription is an image of a paper revealing the publisher's initials draped across a stack of books. Ward, Lock and CO.'s address is listed as "London, Warwick House, Dorset Buildings, Salisbury Square, E.C."

Full-Color Plate on Page 4b of the [1918] Thomas Nelson & Sons, Ltd. Abridged Reprint Depicting Ellen and Mamma Embracing in the Parlour 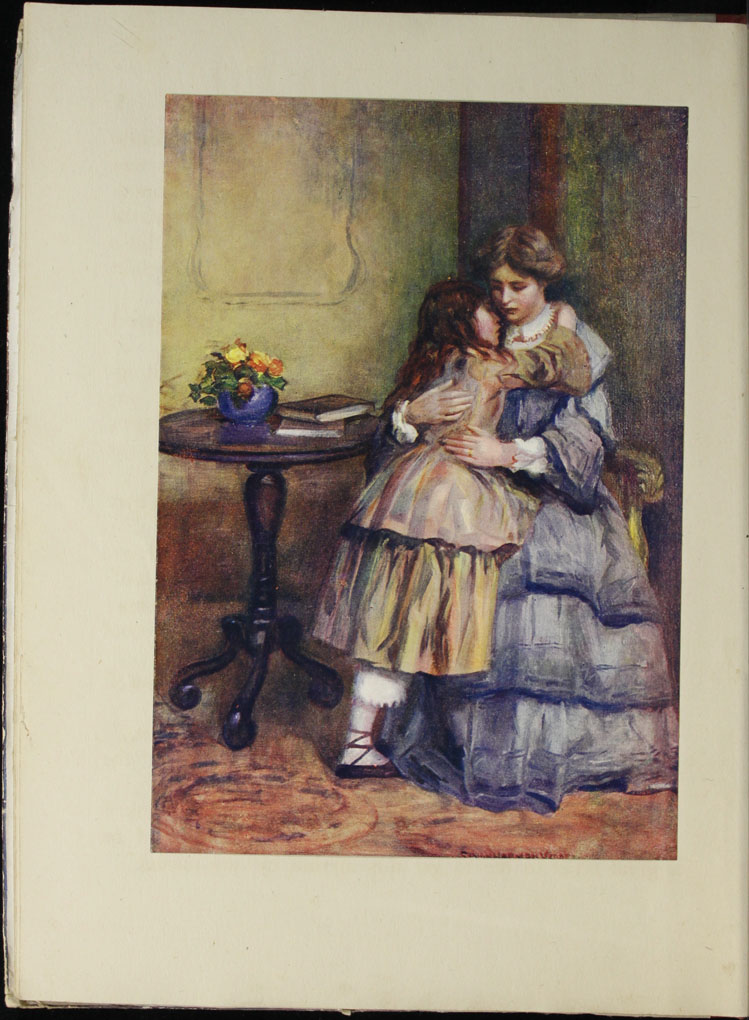 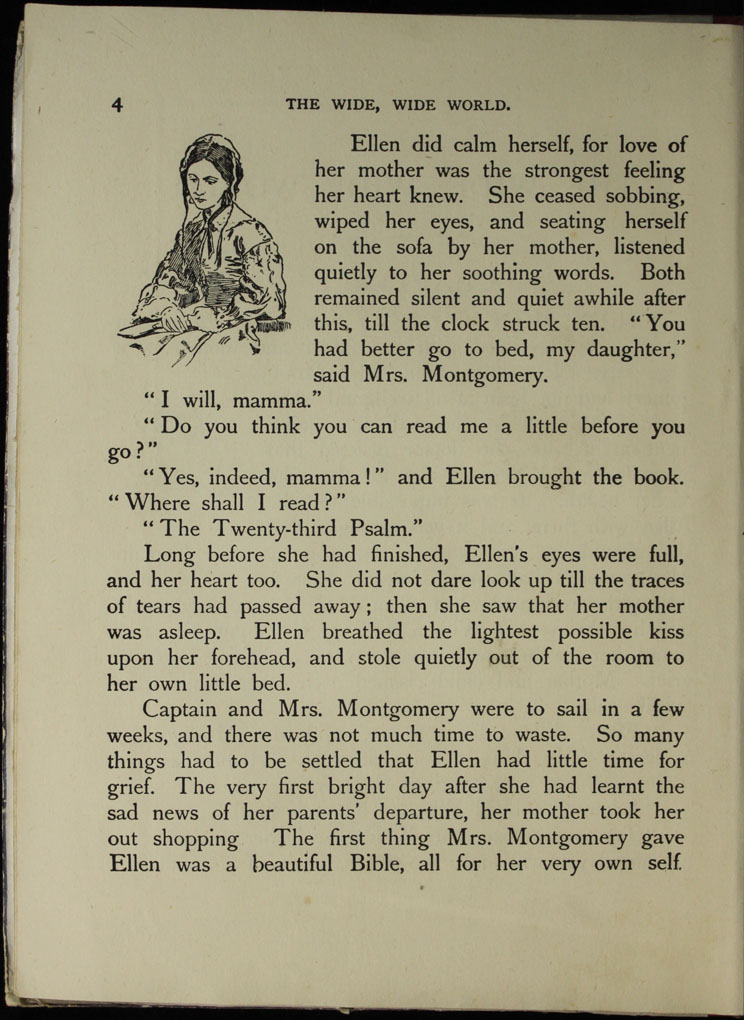 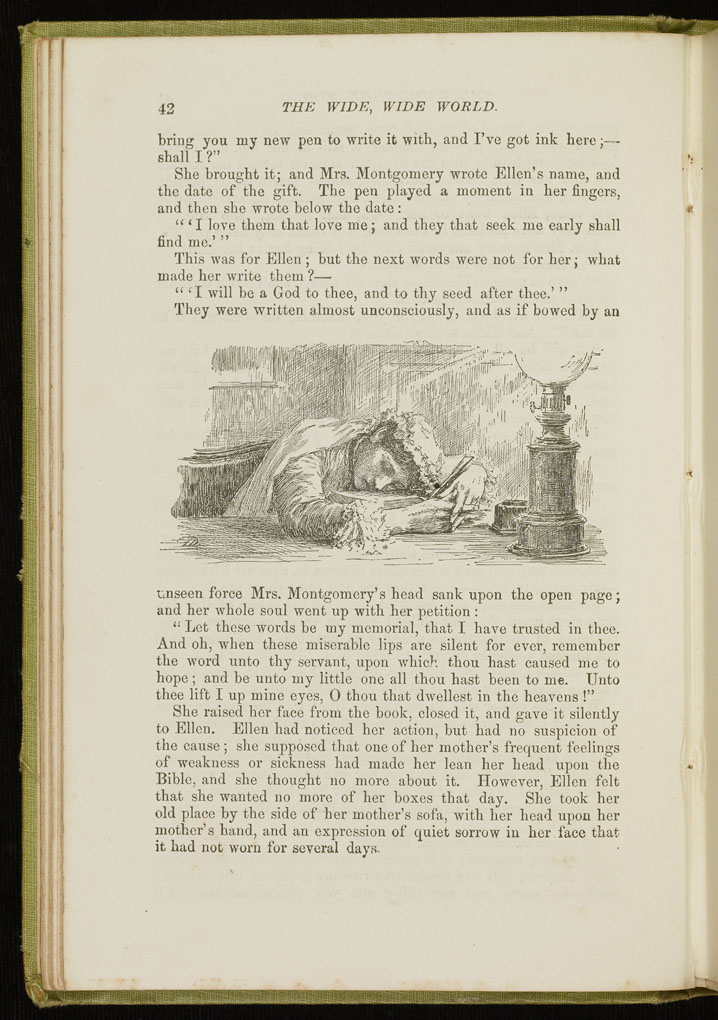 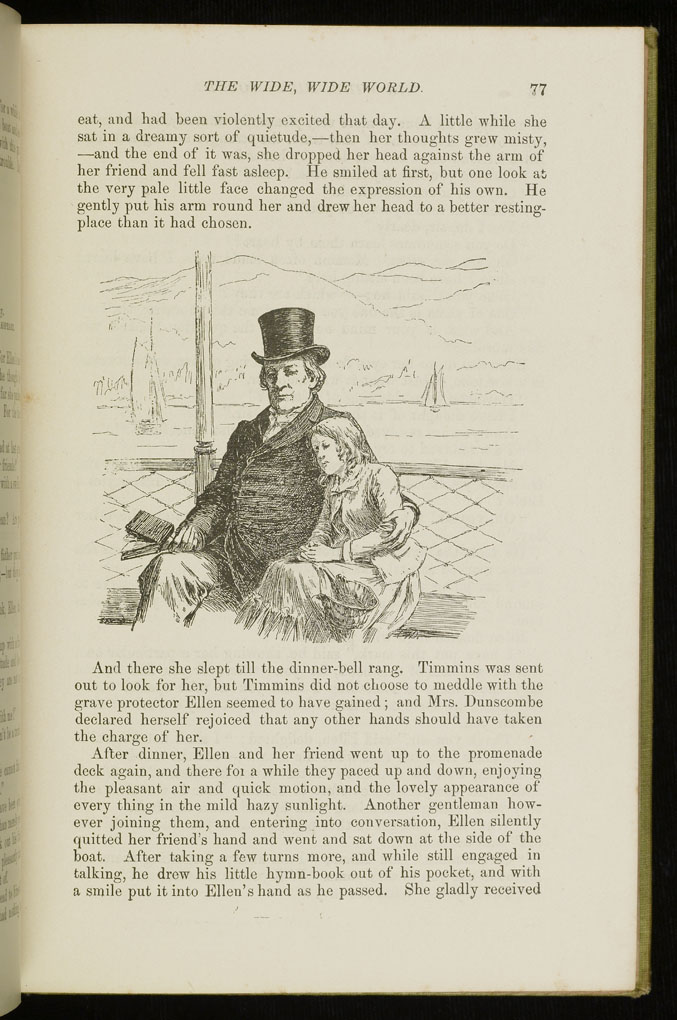 Illustration on Page 215 of the 1896 Hodder and Stoughton Reprint Depicting Mr. Van Brunt Reading to Ellen at Her Sickbed 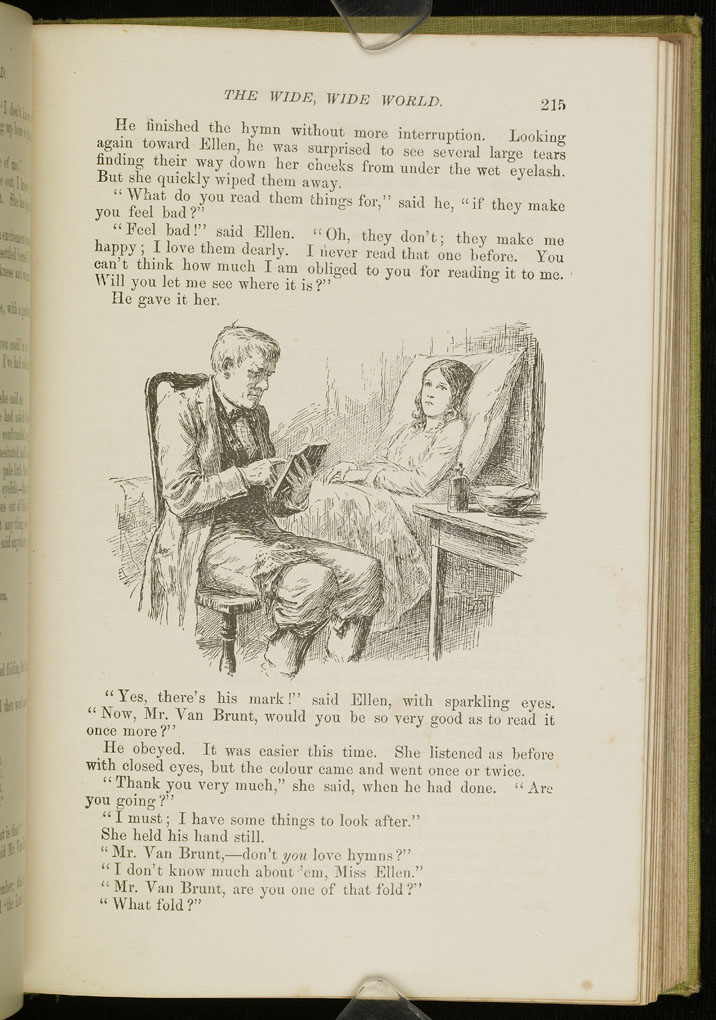