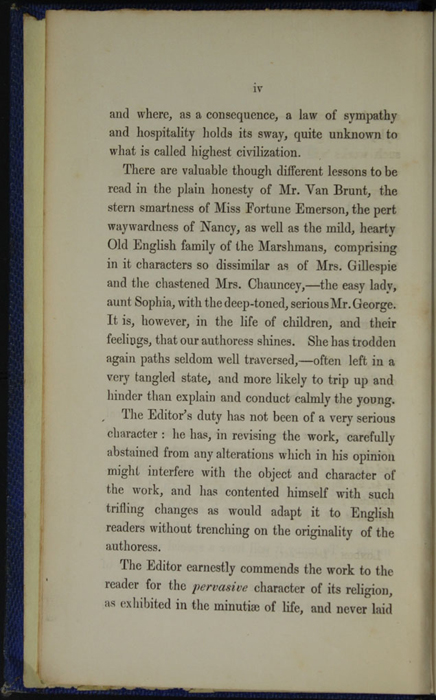 iv
and where, as a consequence, a law of sympathy and hospitality holds its sway, quite unknown to what is called highest civilization.

There are valuable though different lessons to be read in the plain honesty of Mr. Van Brunt, the stem smartness of Miss Fortune Emerson, the pert waywardness of Nancy, as well as the mild, hearty Old English family of the Marshmans, comprising in it characters so dissimilar as of Mrs. Gillespie and the chastened Mrs. Chauncey,—the easy lady, aunt Sophia, with the deep-toned, serious Mr. George. It is, however, in the life of children, and their feelings, that our authoress shines. She has trodden again paths seldom well traversed,—often left in a very tangled state, and more likely to trip up and hinder than explain and conduct calmly the young.

The Editor’s duty has not been of a very serious character : he has, in revising the work, carefully abstained from any alterations which in his opinion might interfere with the object and character of the work, and has contented himself with such trifling changes as would adapt it to English readers without trenching on the originality of the authoress.

The Editor earnestly commends the work to the reader for the pervasive character of its religion, as exhibited in the minutiae of life, and never laid

A Clergyman of the Church of England, “Page iv of the Preface to Volume 1 of the 1852 Sampson Low Reprint,” Wide, Wide World Digital Edition, accessed March 2, 2021, https://widewideworlddigitaledition.siue.edu/items/show/2653.

This is page iv of the preface to volume 1 of the 1852 Sampson Low Reprint.

A Clergyman of the Church of England