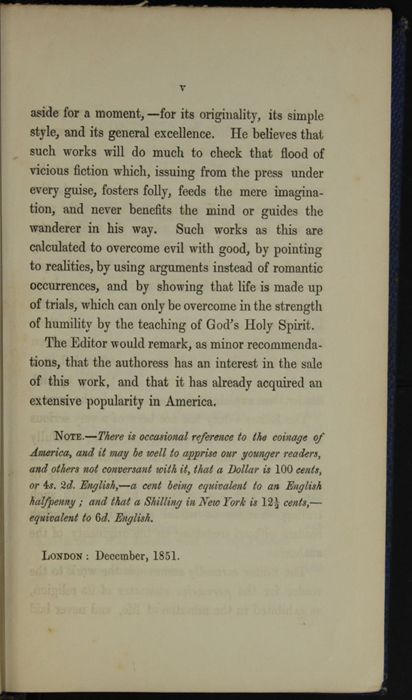 V
aside for a moment, —for its originality, its simple style, and its general excellence. He believes that such works will do much to check that flood of vicious fiction which, issuing from the press under every guise, fosters folly, feeds the mere imagination, and never benefits the mind or guides the wanderer in his way. Such works as this are calculated to overcome evil with good, by pointing to realities, by using arguments instead of romantic occurrences, and by showing that life is made up of trials, which can only be overcome in the strength of humility by the teaching of God's Holy Spirit.

The Editor would remark, as minor recommendations, that the authoress has an interest in the sale of this work, and that it has already acquired an extensive popularity in America.

Note.—-There is occasional reference to the coinage of America, and it may be well to apprise our younger readers, and others not conversant with it, that a Dollar is 100 cents, or 4s. 2d. English,—a cent being equivalent to an English halfpenny ; and that a Shilling in New York is 12 1/2 cents,— equivalent to 6d. English.
London : December, 1851.

A Clergyman of the Church of England, “Page v of the Preface to Volume 1 of the 1852 Sampson Low Reprint,” Wide, Wide World Digital Edition, accessed March 2, 2021, https://widewideworlddigitaledition.siue.edu/items/show/2654.

This is page v of the preface to volume 1 of the 1852 Sampson Low Reprint. It ends with a note stating the American equivalent of English money for American readers. It is from London, dated December 1851.

A Clergyman of the Church of England