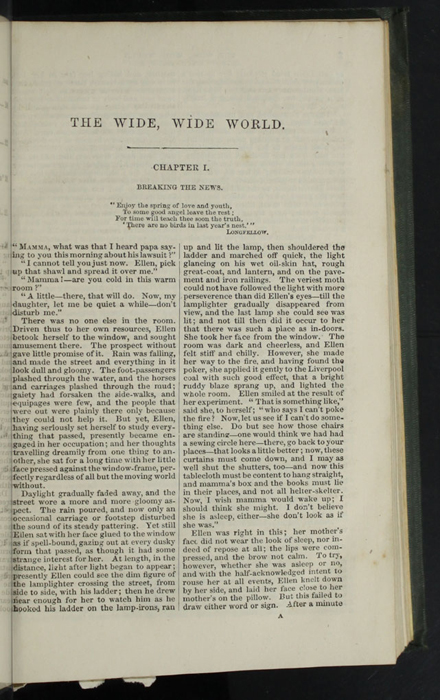 "Enjoy the spring of lore and youth,
To some good angel leave the rest;
For time will teach thee soon the truth,
' There are no birds in last year's nest.' "
Longfellow.

" Mamma, what was that I heard papa saying to you this morning about his lawsuit ?”

“I cannot tell you just now. Ellen, pick up that shawl and spread it over me.”

“Mamma—are you cold in this warm room ?”

“ A little—there, that will do. Now, my daughter, let me be quiet a while—don’t disturb me.”

There was no one else in the room. Driven thus to her own resources, Ellen betook herself to the window, and sought amusement there. The prospect without gave little promise of it. Rain was falling, and made the street and everything in it look dull and gloomy. The foot-passengers plashed through the water, and the horses and carriages plashed through the mud; gaiety had forsaken the side-walks, and equipages were few, and the people that were out were plainly there only because they could not help it. But yet, Ellen, having seriously set herself to study everything that passed, presently became engaged in her occupation; and her thoughts travelling dreamily from one thing to an-other, she sat for a long time with her little face pressed against the window-frame, perfectly regardless of all but the moving world without.

Daylight gradually faded away, and the street wore a more and more gloomy as-pect. The rain poured, and now only an occasional carriage or footstep disturbed the sound of its steady pattering. Yet still Ellen sat with her face glued to the window as if spell-bound, gazing out at every dusky form that passed, as though it had some strange interest for her. At length, in the distance, light after light began to appear; presently Ellen could see the dim figure of the lamplighter crossing the street, from side to side, with his ladder; then he drew near enough for her to watch him as he hooked his ladder on the lamp-irons, ran
up and lit the lamp, then shouldered the ladder and marched off quick, the light glancing on his wet oil-skin hat, rough great-coat, and lantern, and on the pavement and iron railings. The veriest moth could not have followed the light with more perseverence than did Ellen’s eyes—till the lamplighter gradually disappeared from view, and the last lamp she could see was lit; and not till then did it occur to her that there was such a place as in-doors. She took her face from the window. The room was dark and cheerless, and Ellen felt stiff and chilly. However, she made her way to the fire, and having found the poker, she applied it gently to the Liverpool coal with such good effect, that a bright ruddy blaze sprang up, and lighted the whole room. Ellen smiled at the result of her experiment. “ That is something like,” said she, to herself; “who says I can’t poke the fire ? Now, let us see if I can’t do something else. Do but see how those chairs are standing—one would think we had had a sewing circle here—there, go back to your places—that looks a little better; now, these curtains must come down, and I may as well shut the shutters, too—and now this tablecloth must be content to hang straight, and mamma’s box and the books must lie in their places, and not all helter-skelter. Now, I wish mamma would wake up; I should think she might. I don’t believe she is asleep, either—she don’t look as if she was.”

Ellen was right in this; her mother’s face did not wear the look of sleep, nor indeed of repose at all; the lips were compressed, and the brow not calm. To try, however, whether she was asleep or no, and with the half-acknowledged intent to rouse her at all events, Ellen knelt down by her side, and laid her face close to her mother’s on the pillow. But this failed to draw either word or sign. After a minute

This is the first page of text in the 1853 Eli Charles Eginton & Co. "Pocket Library" Reprint. The Wide, Wide World is written above the decorative rule, with Chapter 1 and its title under it. A portion of Longfellow's poem, "It Is Not Always May," is written beneath the chapter title. The text begins about a third of the way down the page.