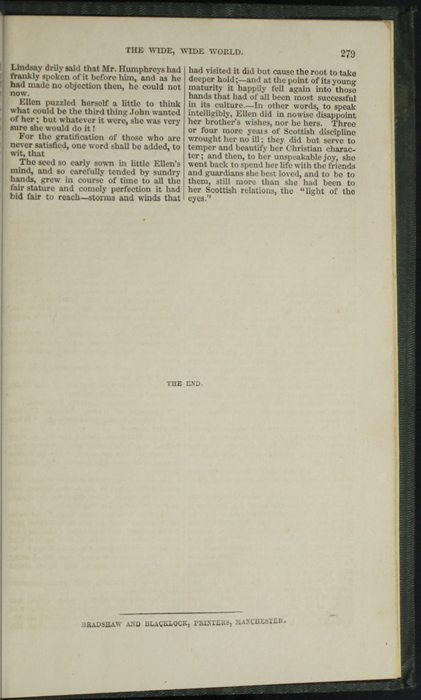 Lindsay drily said that Mr. Humphreys had frankly spoken of it before him, and as he had made no objection then, he could not now.
Ellen puzzled herself a little to think what could be the third thing John wanted of her; but whatever it were, she was very sure she would do it!
For the gratification of those who are never satisfied, one word shall be added, to wit, that

The seed so early sown in little Ellen’s mind, and so carefully tended by sundry hands, grew in course of time to all the fair stature and comely perfection it had bid fair to reach—storms and winds that
had visited it did but cause the root to take deeper hold;—and at the point of its young maturity it happily fell again into those hands that had of all been most successful in its culture.—In other words, to speak intelligibly, Ellen did in nowise disappoint her brother’s wishes, nor he hers. Three or four more years of Scottish discipline wrought her no ill; they did but serve to temper and beautify her Christian character ; and then, to her unspeakable joy, she went back to spend her life with the friends and guardians she best loved, and to be to them, still more than she had been to her Scottish relations, the “light of the eyes.”

This is the colophon on the last page of text in the 1853 Eli Charles Eginton & Co. "Pocket Library" Reprint. The text is on the top third of the page, with "The End" in the middle of the page. The colophon at the bottom of the page reads, "Bradshaw and Bradlock, Printers, Manchester."