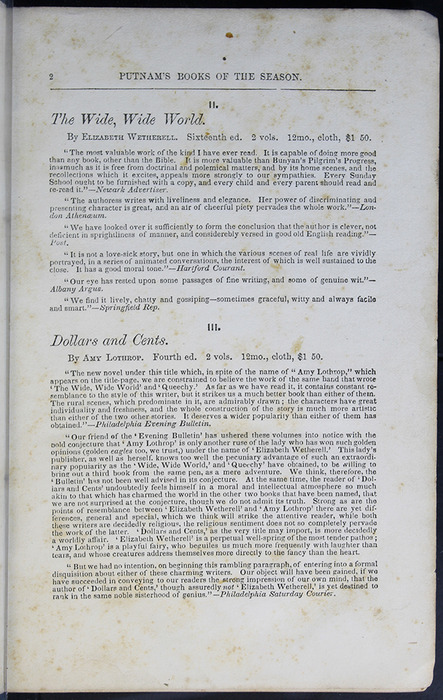 " The most valuable work of the Kind I have ever read. It la capable of dolor more food than any book, other than the Bible. It is more valuable than Bunyan’s Pilgrim’s Progress, inasmuch as it is free from doctrinal and polemical matters, and by its home scenes, and the recollections which it excites, appeals more strongly to our sympathies. Every Sunday School ought to be furnished with a copy, and every child and every parent should read and re-read it.”—Newark Advertiser.

" The authoress writes with liveliness and elegance. Her power of discriminating and presenting character is great, and an air of cheerful piety pervades the whole work.”—Lon* don Athenum.

*. We have looked over it sufficiently to form the conclusion that the author is clever, not deficient in sprightliness of manner, and considerably versed in good old English reading.”— Post.

“ It Is not a love-sick story, but one in which the various scenes of real life are vividly portrayed, in a series of animated conversations, the interest of which is well sustained to the close. It has a good moral tone."—Hartford Courant.

“Our eye has rested upon some passages of fine writing, and some of genuine wit."— Albany Argus.

“ We find It lively, chatty and gossiping—sometimes graceful, witty and always facile and smart.”—Springfield Rep.
III.

“The new novel under this title which, in spite of the name of “ Amy Lothtop,” which appears on the title-page, we arc constrained to believe the work of the same hand that wrote • The Wide. Wide World’ and ‘ Queechy.’ As far as we have read it. it contains constant re-semblance to the style of this writer, but it strikes us a much better book than either of them. The rural scenes, which predominate in it, arc admirably drawn; the characters have great individuality and freshness, and the whole construction of the story is much more artistic than either of the two other stories. It deserves a wider popularity than cither of them has obtained.”—Philadelphia Evening Bulletin.

“ Our friend of the Evening Bulletin has ushered these volumes into notice with the bold conjecture that ‘ Amy Lothrop* is only another ruse of the Indy who has won such golden opinions (golden eagles too. we trust,) under the name of' Elizabeth Wetherell.’ This lady's publisher.as well as herself, knows too well the pecuniary advantage of such an extraordinary popularity as the ‘Wide. Wide World,’ and ’Queechy’ have obtained, to be willing to bring out a third book from the same pen, as a mere adventure. We think, therefore, the ‘ Bulletin* has not been well advised in its conjecture. At the same time, the reader of 4 Dollars and Cents’ undoubtedly feels himself in a moral and intellectual atmosphere so much akin to that which has charmed the world in the other two hooks that have been named, that we are not surprised at the conjecture, though we do not admit its truth. Strong as are the points of resemblance between4 Elizabeth Wetherell* and 4 Amy Lothrop’ there are yet differences, general and special, which we think will strike the attentive reader, while both these writers tire decidedly religious, the religious sentiment does not so completely pervade the work of the latter. 4 Dollars and Cents,’ as the very title may import, is more decidedly a worldly affair. 4 Elizabeth Wetherell' is a perpetual well-spring of the most tender pathos; ‘ Amy Lothrop’ is a playful fairy, who beguiles us much more frequently with laughter than tears, and whose creatures address themselves more directly to the fancy than the heart.

“ But we had no intention, on beginning this rambling paragraph, of entering into a formal disquisition about either of these charming writers. Our object will have been gained, if we have succeeded in conveying to our readers the strong impression of our own mind, that the author of • Dollars and cents.’ though assuredly not ‘ Elizabeth Wetherell.’ is yet destined to rank In the same noble sisterhood of genius.”—Philadelphia Saturday Courier.

This is the second page of front advertisements in volume 2 of the 1852 George P. Putnam 16th Edition, Version 2. This page of advertisements begins with a header of "PUTNAM'S BOOKS OF THE SEASON." and underlined. Above each of the succeeding titles are the Roman Numerals "II." and "III." respectiveley. The page includes extended advertisements for The Wide, Wide World by Elizabeth Wetherell, and Dollars and Cents by Amy Lothrop. There appears to be foxing on the page as well.