First Page of Back Advertisements in Volume 2 of the 1852 George P. Putnam 16th Edition, Version 2 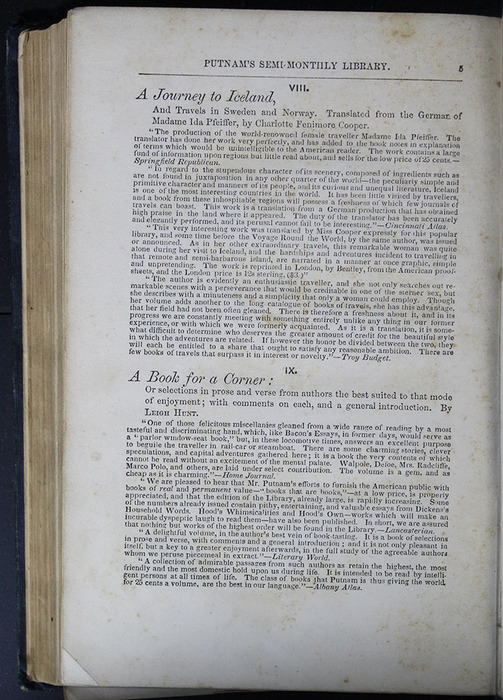 A Journey to Iceland,

And Travels In Sweden and Norway. Translated from the German of

••The production of the world-renowned female traveller Madame Ida Pfeiffer. The translator has done her work very perfectly, and has added to the book notes in explanation of terms which would be unintelligible to the American reader. The work contains a large fund of information upon regions but little read about, and sells for the low price of 25 cents.— Springfield Republican.

In regard to the stupendous character of its scenery, composed of ingredients such as are not found in juxtaposition in any other quarter of the world—the peculiarly simple and primitive character and manners of its people, and its curious and unequal literature. Iceland is one of the most interesting countries in the world. It has been little visited by travellers, and a book from these inhospitable regions will possess a freshness of which few journals of travels can boast. This work is a translation from a German production that has obtained high praise in the land where it appeared. The duty of the translator has been accurately and elegantly performed, and its perusal cannot fail to be interesting."— Cincinnati Atlas.

“This very interesting work was translated by Miss Cooper expressly for this popular library, and come time before the Voyage Round the World, by the same author, was issued or announced. As in her other extraordinary travels, this remarkable woman was quite alone during her visit to Iceland, and the hardships and adventures incident to travelling in that remote and semi-barbarous island, are narrated in a manner at once graphic, simple and unpretending. The work is reprinted in London, by Bentley, from the American proof* sheets. and the London prico is 12s sterling, ($3.)"

“The author is evidently an enthusiastic traveller, and she not only searches out remarkable scenes with a perseverance that would be creditable in one of the sterner sex, but she describes with a minuteness and a simplicity that only a woman could employ. Though her volume adds another to the long catalogue of books of travels, sho has this advantage, that her field had not been often gleaned There is therefore a freshness about it, and in its progress we are constantly meeting with something entirely unlike any thing in our former experience, or with which we were formerly acquainted. As it is a translation, it is some* what difficult to determine who deserves the greater amount of credit for the beautiful style in which the adventures are related. If however the honor be divided between the two, they will each be entitled to a share that ought to satisfy any reasonable ambition. There are few books of travels that surpass it in interest or novelty."—Troy Budget.
A Book for a Corner:

Or selections in prose and verse from authors the best suited to that mode of enjoyment; with comments on each, and a general introduction. By Leigii Hunt.

“ One of those felicitous miscellanies gleaned from a wide range of reading by a most tasteful and discriminating hand, which, like Bacon's Essays, in former days, would serve as a "parlor window-seat book," but, in these locomotive times, answers an excellent purpose to beguile the traveller in rail-car or steamboat. There are some charming stories, clever speculations, and capital adventures gathered here; it is a book the very contents of which cannot be read without an excitement of the mental palate. Walpole, Defoe, Mrs. Radcliffe, Marco Polo, and others, are laid under select contribution. The volume is a gem, and as cheap as it is charming."—Home Journal.

"We are pleased to hear that Mr. Putnam's efforts to furnish the American public with books of real and permanent value—"books that are books,"—at a low price, is properly appreciated, and that the edition of the Library, already large, is rapidly increasing. Some of the numbers already issued contain pithy, entertaining, and valuabc essays from Dickens's Household Words. Hood's Whimsicalities and Hood's Own—works which will make an incurable dyspeptic laugh to read them—have also been published. In short, we are assured that nothing but works of the highest order will be found in the Library.—Lancasterian. .

“ A delightful volume, in the author's best vein of book-tasting. It is a book of selections in prose and verse, with comments and a general introduction ; and it is not only pleasant in itself, but a key to a greater enjoyment afterwords, in the full study of the agreeable authors whom we peruse piecemeal in extract."— Literary World.

"A collection of admirable passages from such authors as retain the highest, the most friendly and the most domestic hold upon us during life. It is intended to be read by intelli-
-gent persons at all times of life. The class of books that Putnam is thus giving the worldfor 25 cents a volume, are the best in our language."—Albany Atlas.

This is the first page of back advertisements in volume 2 of the 1852 George P. Putnam 16th edition, version 2. The books advertised on this page are A Journey to Iceland, And Travels in Sweden and Norway translated from Madame Ida Pfeiffer by Charlotte Fenimore Cooper, and A Book for a Corner: Or selections in prose and verse from authors the best suited to that mode of enjoyment; with comments on each, and a general introduction by Leigh Hunt.