Second Page of Back Advertisements in Volume 2 of the 1852 George P. Putnam 16th Edition, Version 2 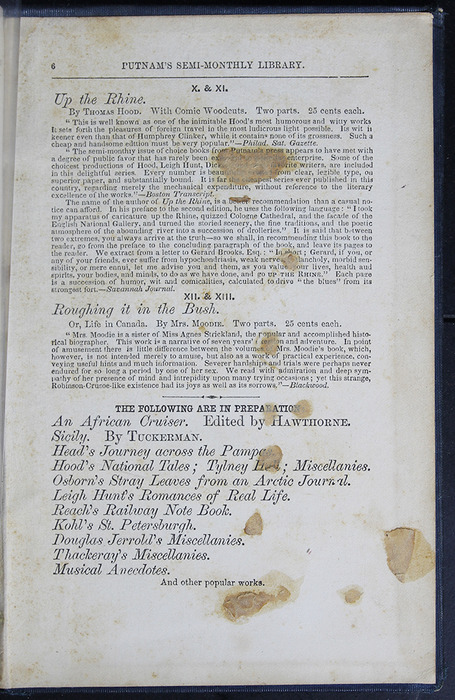 By Thomas Hood. With Comic Woodcuts. Two parts. 25 cents each.

“This is well known as one of the inimitable Hood's most humorous and witty works It sets forth the pleasures of foreign travel in the most ludicrous light possible. Its wit it keener even than that of Humphrey Clinker, while it contains none of its grossness. Such a cheap and handsome edition must be very popular.”—Philad. Sat. Gazette.

*' The semi-monthiy issue of choice books from Putnam's Press appears to have met with a degree of public favor that has rarely been...[Illegible]...enterprise. Some of the choicest productions of Hood, Leigh Hunt,...[Illegible]...writers, are included in this delightful series. Every number...[illegible]...clear, legible type, on superior paper, and substantially bound. It is far the cheapest series ever published in this country,'regarding merely the mechanical .expenditure, without reference to the literary ■*excellence of the works.”—Boston Transcript.

The name of the author of Up the Rhine, is a...[illegible]...recommendation than a casual notice can afford. In his preface to the second edition, he uses the following language: “ I took my apparatus of caricature up the Rhine, quizzed Cologne Cathedral, and the facade of the English National Gallery, and turned the storied scenery, the fine traditions, and the poetic atmosphere of the abounding river Into a succession of drolleries.” It is said that between two extremes, you always arrive at the truth—so we shall, in recommending this book to the reader, go from the preface to the concluding paragraph of the book, and leave its pages to the reader. We extract from a letter to Gerard Brooks, Esq.: “ In short; Gerard, if you, or any of your friends, ever suffer from hypochondriasis, weak nerves, melancholy, morbid sensibility, or mere ennui, let me advise you and them, as you value your lives, health aud spirits, your bodies, and minds, to do as wo have done, and go up the Rhine.'’ Each page is a succession of humor, wit and comicalities, calculated to drive “the blues” from its strongest fort.—Savannah Journal.

Roughing it in the Bush.

“Mrs. Moodie is a sister of Miss Agnes Strickland, the populnr and accomplished historical biographer. This work is a narrative of seven years'...[illegible]...and adventure. In point of amusement there is little difference between the volumes of Mrs. Moodie's book, which, however, is not intended merely to amuse, but also as a work of practical experience, conveying useful hints and much information. Severer hardships and trials .were perhaps never endured for so long a period by one of her sex. We read with admiration and deep sympathy of her presence of mind and intrepidity upon many trying occasions; yet this strange, Robinson-Crusoe-like existence had its joys as well as its sorrows.”—Blackwood.

THE FOLLOWING ARE IN PREPARATION

An African Cruiser. Edited by Hawthorne.

And other popular works.

This is the second page of back advertisements in volume 2 of the 1852 George P. Putnam 16th edition, version 2. The books advertised on this page include: Up the Rhine, Roughing it in the Bush, An African Cruiser, Sicily, Head's Journey across the Pampas, Hood's National Tales: Tylney Hell; Micellanies, Osborn's Stray Leaves from an Arctic Journal, Leigh Hunt's Romances of Real Life, Reach's Railway Note Book, Kohl's St. Petersburgh, Douglas Jerrold's Miscellanies, Thackeray's Miscellanies, and Musical Anecdotes.