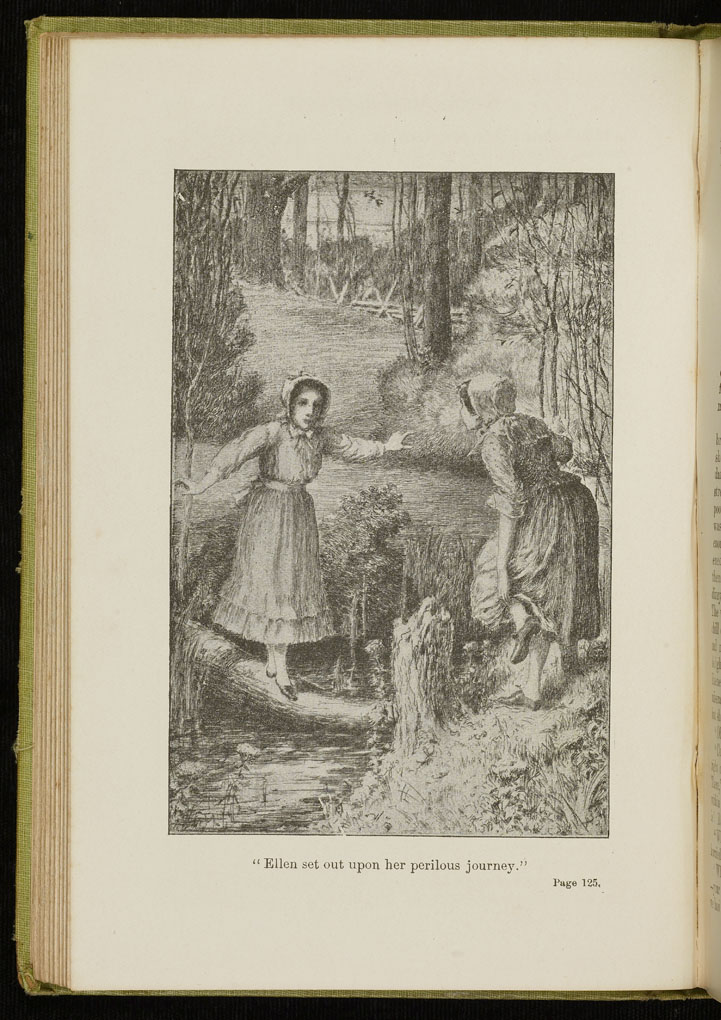 This black and white illustration, appearing on page 124a of the 1896 Hodder and Stoughton reprint, depicts Ellen crossing the brook as Nancy waits for her on the other side. A caption below the illustration quotes a sentence from page 125 and reads, "Ellen set out upon her perilous journey." This quote heightens the sense of anticipation already present in the illustration as Ellen holds her arms out to steady herself as she steps onto a log to cross the narrow brook. Nancy stands on the other side of the brook, holding onto a tree as she clutches at her sock, leaning forward to either mock or encourage Ellen. Foliage surrounds the two girls and a short fence can be seen in the background. 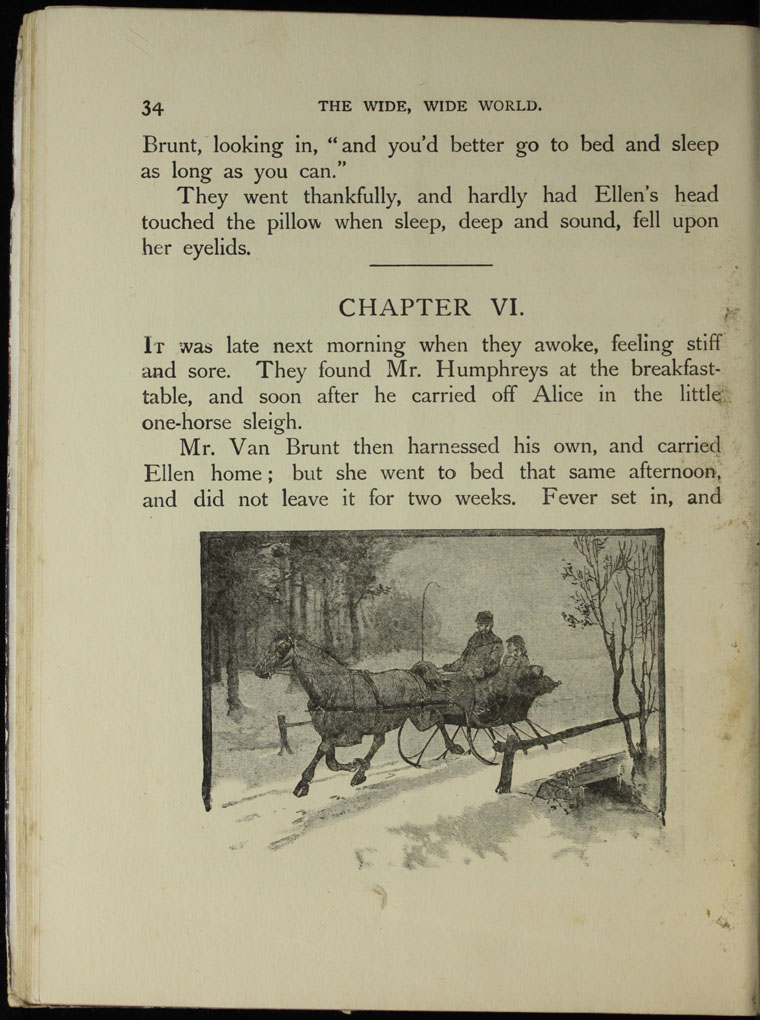 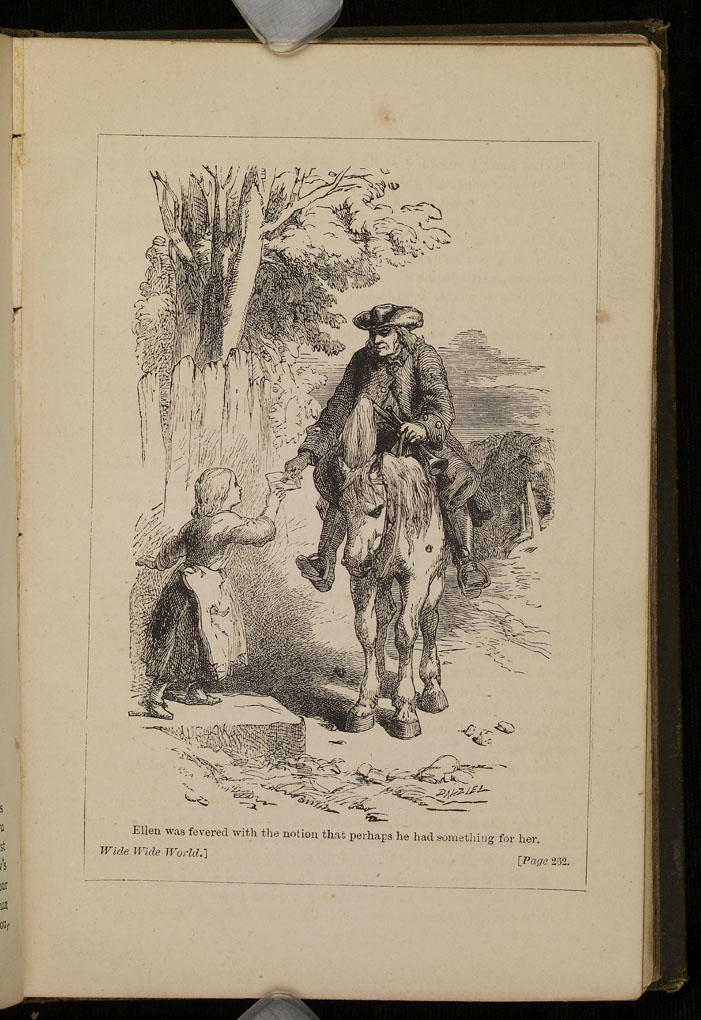 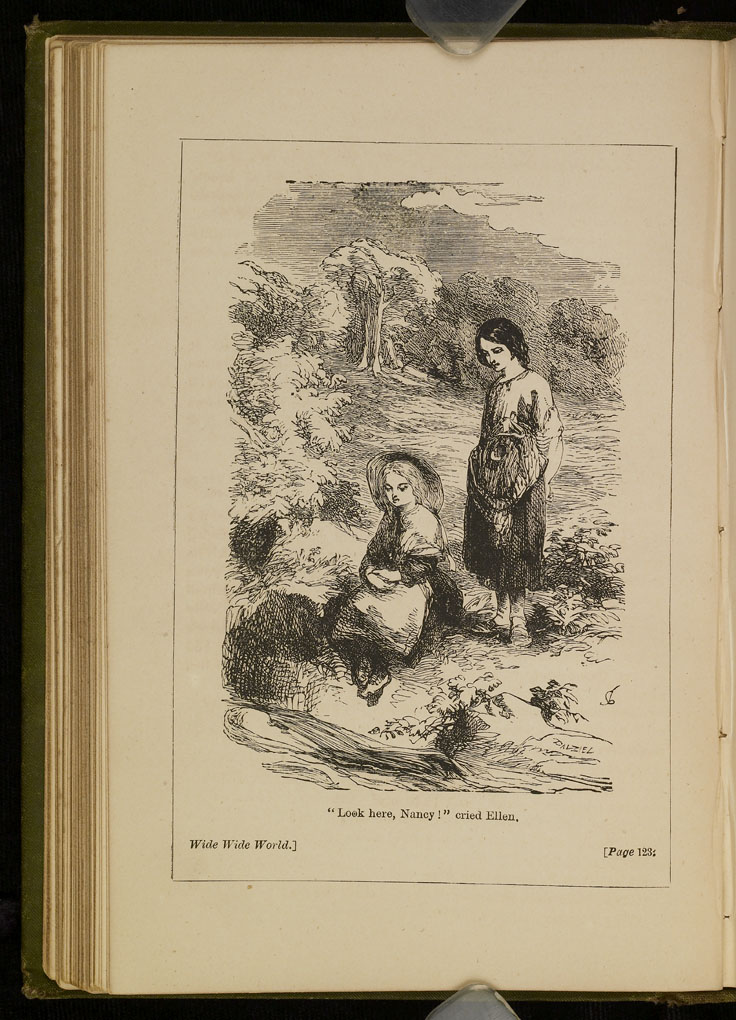 This black and white illustration, appearing on page 122b of the [1885] Ward, Lock and Co. Home Treasure Library Edition, depicts Nancy finding Ellen at the brook. Ellen sits next to the water with her hands in her lap as Nancy stands behind Ellen looking down at her. A line of trees extends across the background of the illustration and several bushes surround Ellen and Nancy. A caption below the illustration quotes a sentence from page 123 and reads, "'Look here, Nancy!' cried Ellen." The excitement conveyed in the caption is subdued by the stillness conveyed in the illustration as Ellen sits quietly by the brook. 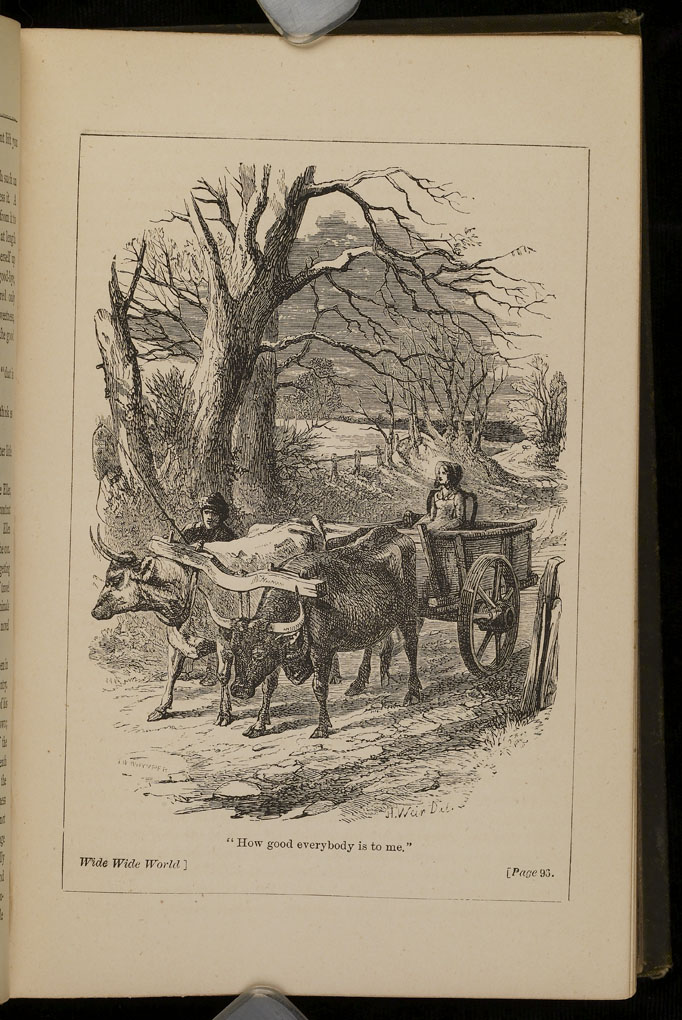 This black and white illustration, appearing on page 96a of the [1878] Ward, Lock and Co. Home Treasure Library reprint, depicts Ellen riding in the ox cart as Mr. Van Brunt walks alongside the oxen. Mr. Van Brunt holds up a whip as Ellen sits in a chair in the ox cart looking around her. The landscape surrounding the ox cart is bleak as bare trees hang over the path, and the dark sky contrasts the white ground, suggesting cold weather. A caption below the illustration quotes a sentence from page 93 and reads, "'How good everybody is to me,'" conveying Ellen's gratitude for the help she receives when she arrives in Thirlwall.

Illustration on Page 118b of the [1890] Frederick Warne & Co. Reprint Depicting Ellen and Nancy at the Brook 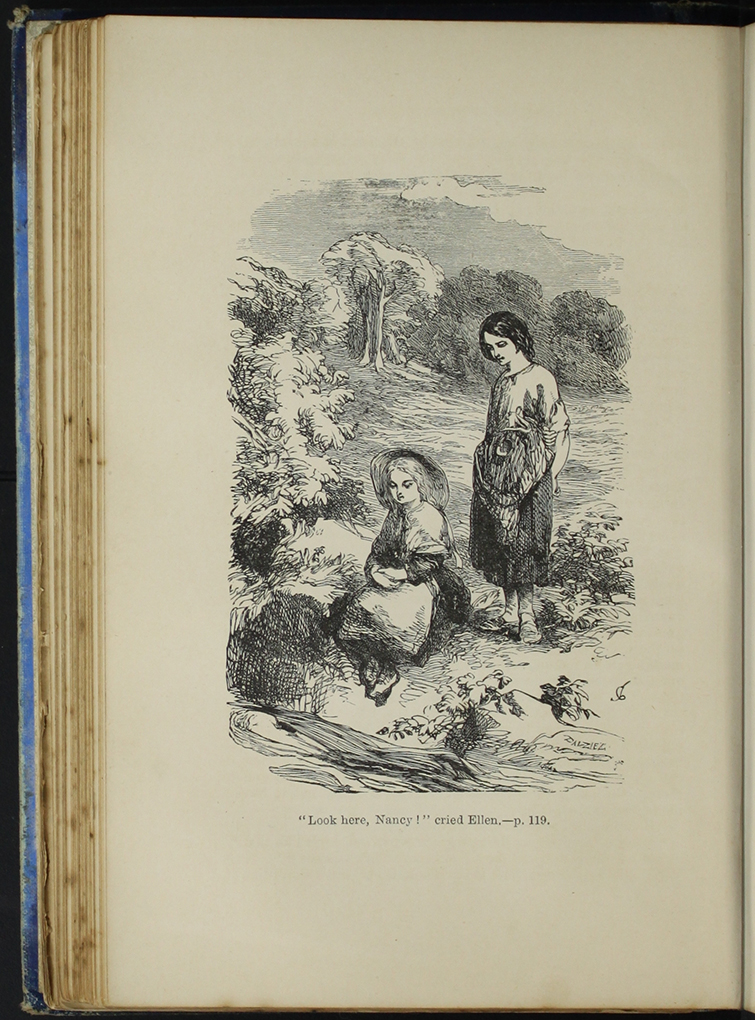 Illustration on Page 424a of the 1853 G. Routledge and Co. Reprint Depicting Ellen and John on the Cat's Back 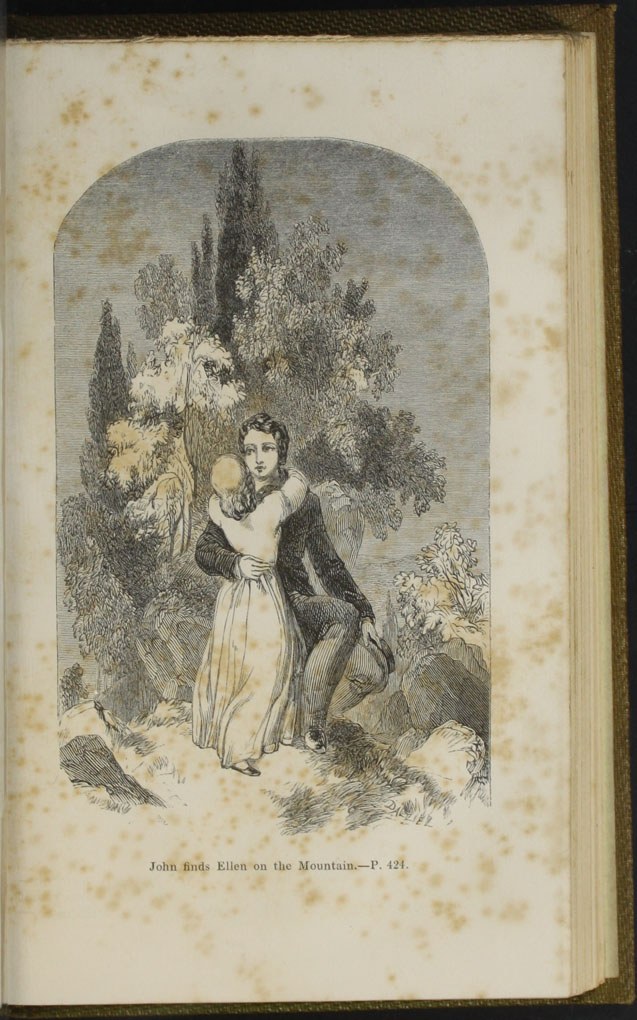 This is the illustration on page 424a of the 1853 G. Routledge and Co. Reprint Depicting Ellen and John on the Cat's Back. A caption below the illustration reads "John finds Ellen on the Mountain," a reference to the scene after Alice's death appearing on page 424. In the illustration, John stoops down and wraps one arm around Ellen as she stands with her arms around his neck facing away from the viewer. They are surrounded by rocks and tall foliage, which frame their position on the mountain. Ellen's white dress stands out against John's black attire and the dark grey foliage behind them. The name of the illustrator, Dalziel, is inscribed in the lower-right corner of the illustration.

Subjects: The Cat’s Back, Ellen, John

Illustration on Page 332b of the 1853 G. Routledge and Co. Reprint Depicting the Letter Carrier's Arrival 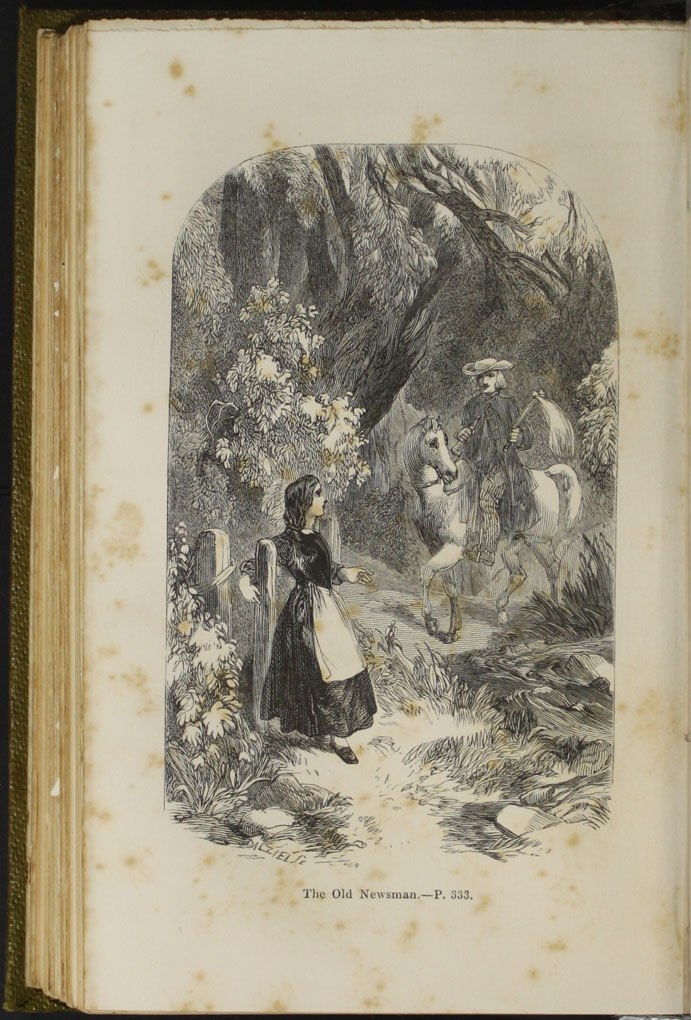 Illustration on Page 274a of the 1853 G. Routledge & Co. Reprint Depicting Ellen, Alice, and John Preparing for their Sleigh Ride to the Marshman's 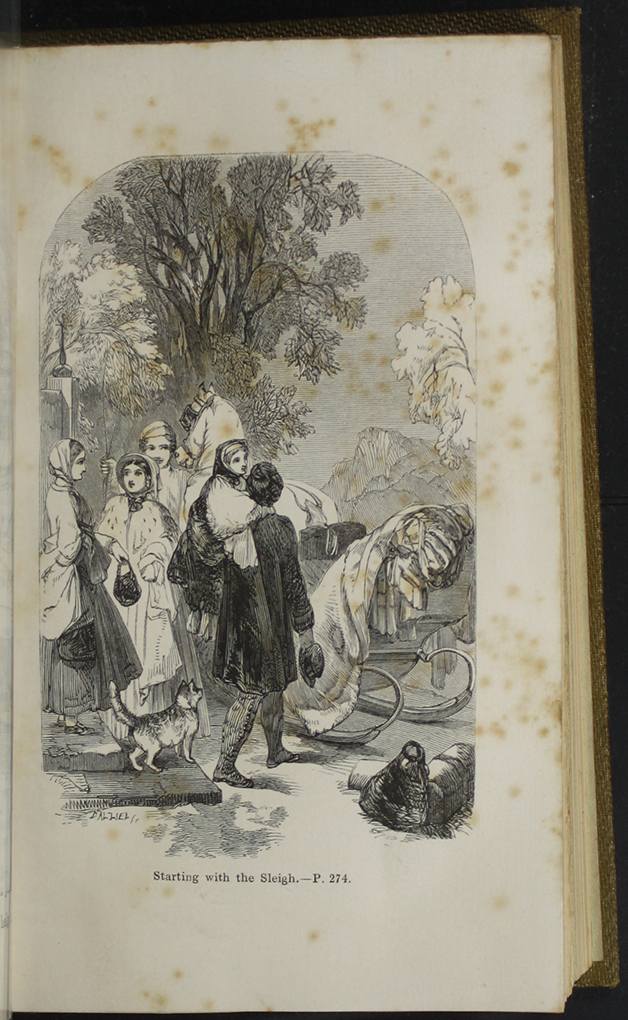 This black and white illustration, appearing on page 274a of the 1853 G. Routledge & Co. reprint, depicts Ellen, Alice, and John about to get on the sleigh that will take them to the Marshman's for Christmas. John is carrying Ellen to put her in the sleigh, with Alice and Margery talking behind them. The sleigh's driver stands waiting in the background. Captain Parry(?) appears prepared to jump into the sleigh, and the horse Prince Charlie is hitched to the sleigh. A caption below the illustration reads, "Starting with the Sleigh," referencing the scene from page 274 of the novel. The trees around the sleigh give a pleasant natural frame to the scene. The name of the illustrator, Dalziel, is inscribed in the lower-left corner of the illustration. 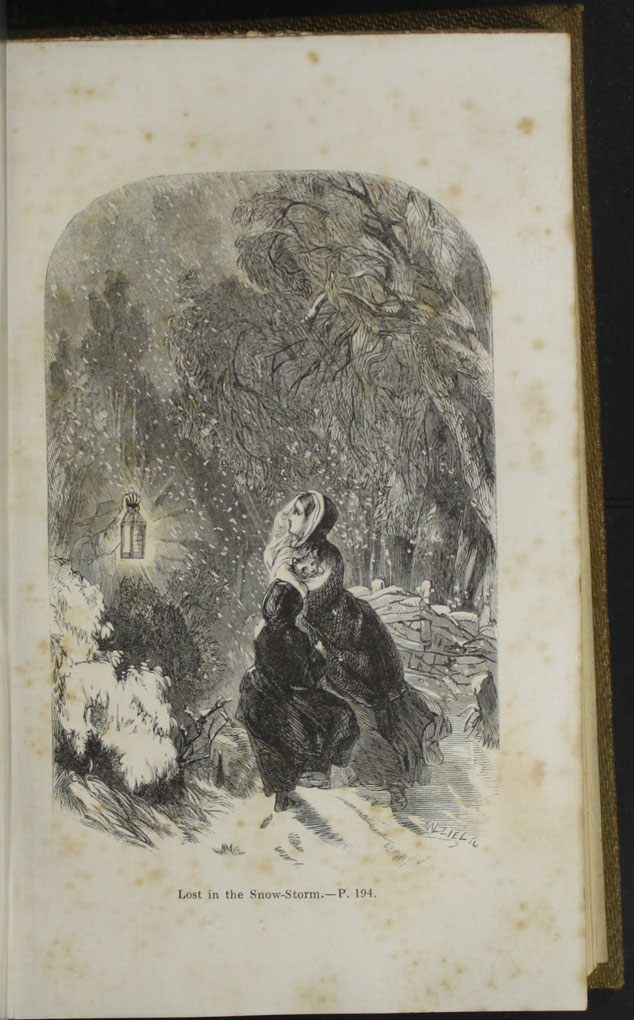