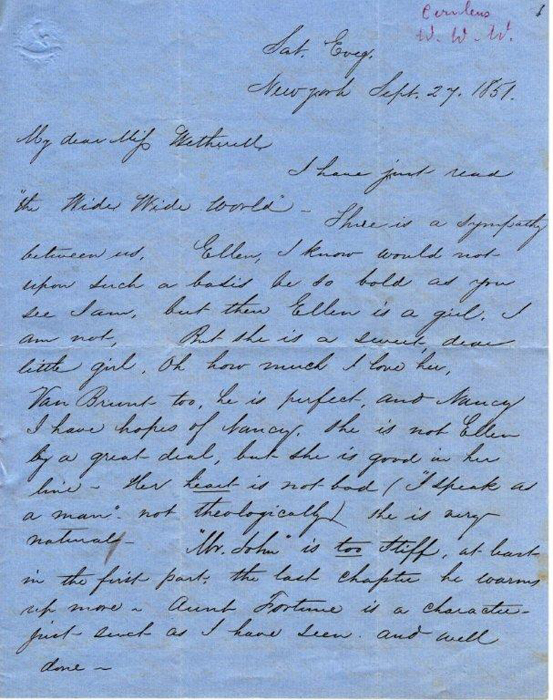 I have just read “the Wide Wide World”--

There is a sympathy between us, Ellen, I know would not upon such a basis be so bold as you see I am, but then Ellen is a girl.  I am not.  But she is a sweet, dear little girl.  Oh how much I love her.  Van Brunt too, he is perfect, and Nancy.  I have hopes of Nancy.  She is not Ellen by a great deal, but she is good in her line.  Her heart is not bad (“I speak as a man”-- not theologically) she is very natural.  “Mr. John” is too stiff, at least in the first part, the last chapter he warms up more.  Aunt Fortune is a character just such as I have seen.  And well done—

Alice I admire.  Mrs. Vawes [sic] I respect and old Mr. Humphreys – (I don’t mean John) – and I have kindly feelings for the pleasant Marshman family.  But Van Brunt and dear Ellen I love – good Van Brunt, I am so glad at the last news of him.

That going to Scotland was a bad move, still it may turn out for the best.

The first volume is generally the best, but then you became a little tired at last, and we cant work well without the heart is in it. (for having written a book or so myself I speak from experience) – You see I am playing Master John, and you must be, for the time, as I strongly suspect -- in reality you are – Ellen – But I cannot get Ellen out of my mind, I dont try very hard.  She is a sweet, dear girl – just such as I should like for a wife – at least in most respects – I fear however I stand no chance while

that Mr. John is alive, what could bewitch the child so for him, he is far too old.  by the way, dont say in the sequel -- of course we are to have a sequel – “the far corner” – “the far end,” etc anymore will you?

I am a little like Ellen, I should very much like to see the fair Authoress, could I do so without being seen.  But seriously, the thanks of true Christians are yours, you have contributed much to their enjoyment, something to their improvement, and have “let the little rush light burn bright”, before a wondering world, wondering so small a rush should give so clear a light.  With many [thanks] I have greatly enjoyed your book--  you have set a noble example, in breathing, so strong, so healthful and so true a spirit of genuine, vital religion on every page.  I know you will be glad to hear this from one who assures you he is

You will be surprized at receiving this letter its date, & probably at receiving it at all, and you are doubtless entitled to some explanation, for both, after a lapse & oblivion of five months.  I observe it lies open to many serious criticisms but when written it was the spontaneous effusions of my heart, and such are removed above the fear or the reach of criticism.

A slight obstacle prevented it being sent at the time. and it would have lain among a mass of rejected papers, till a conflagration had disposed of it, perhaps to better purposes, had I not yielded to the repeated solicitations of a friend, (to whom I had the weakness to show it)-- that it should be brot. forth to accompany his own in the same envelope, where you will yet find it, if I muster sufficient courage, or impudence to send it--

But, however I may reconsider the propriety of my own course. my opinion, and estimation of the books remain the same in character and heightened in degree.  If you will

allow the judgment of an unprejudiced admirer of the book.

The great forte of it appears to be its naturalness, its truly American character, and its pure, real religious tone and spirit.

Among the many who have read it, there are a few, who were but tolerably pleased with it.  there were, however young men who from their peculiar temperament or early training were unable to enter into the spirit of it – there was no chord within them, in unison with nature.

A lady who admired the book remarked to me “that not to like it, is an evidence of a bad head or a bad heart,” I replied (as I think is partly true) that it is an evidence of both.  With my admiration of the Book – supposing the converse to be true, you must suppose me to be in a very complacent mood--

I see not how anyone of good taste (to say nothing of religious feeling) can help admiring it, unless it be those whose taste (if they have any) is perverted

by high wrought and unreal fictions, and romantic novels – and even among such, I know some who appreciate “the Wide Wide World”.

The book is true to nature and anyone who has observed nature, and human nature, in its American, country, development cannot fail to see its faithfulness, in every touch and coloring.  Scotland I have never seen, nor is it necessary that I should speak of her.  She had an able, an enthusiastic, if not a fanatical Eulogist in the person of my friend the “admirer of Alice,” but of New England I can speak, or rather she speaks for herself.  I may say that there, I “have seen the scenes”. (in the language of our Aldermen) “I have seen the scenes” you seem to have seen, precisely, & so truthfully are they delineated, that I almost start as at the recognition of a familiar face in a foreign land,  “So specially have you observed” (according to the great Poet) “to overstep not the modesty of nature” –

But tho there is much I would say, I perceive the postscript already excuses the letter, and I will only add, that if my love be not so extravagant as at first, ‘tis none the less real. And I remain now as before,